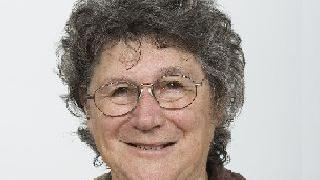 On June 22nd 2012 we learned that former Green Party Principal Speaker, Cambridge councillor, international coordinator and long term activist Margaret Wright had died of cancer. She will be hugely missed by her local party, as well as nationally and across Europe where she was a well known figure, contributing to many European Green summits and meetings. I had the pleasure of working with Margaret when I was an MEP and always appreciated her guidance and perspective. Many members will have got to know her as a much loved and respected Principal Speaker, approaching the role with humour and commitment. One of the Party's earliest members, she embodied the resolve and passion we hold so dear and our thoughts are with her family and friends at this time. Thank you to Cambridge Green Party for the following tribute to Margaret's many achievements and qualities.

Margaret was born and raised in Newcastle, and kept that indomitable Geordie approach throughout her life. She read history at Bedford College, University of London in 1960 where she developed a keen interest in women's' issues and activism. Following this she married and had three children. Later she moved to the Cambridge area, with her three children. Her first rented accommodation was first floor rooms overlooking that very lovely bridge in St. Ives, and she would later often take a bus to visit.

As a mother Margaret developed a keen interest in home confinement, childbirth and natural childbirth strategies. She was a passionate proponent of breast feeding and throughout her life her interests and beliefs were often linked to her family and children.

Her youngest daughter, Alison contracted meningitis which resulted in severe disability, numerous on-going battles with the health establishment, and ultimately the death of Alison aged 17.

Margaret was also involved in green and peace activism from the outset, having campaigned at Greenham Common and Molesworth, so that involvement in the green party from its foundation was a natural progression for her.

She obtained a teaching certificate at Oxford University, and then as an adult, studied for a Masters in Art History at Birkbeck College, University of London. This was in parallel with her son also studying art at the time.

Margaret joined the Ecology Party in 1979 and often said "I have never left." She served as one of the two principal speakers the green party (1999-2003) and played a significant role in international green party affairs where she formed enduring bonds with Heidelberg, Petra Kelly and the German Green party. She stood for the Westminster Parliament twice and as the lead candidate for the European Parliament, in the Eastern Region. She set records for persistence in Cambridge by running for the Council more times than anybody else (20 times), until finally she got elected. It is therefore tragic that she could only serve one term before her illness prevented her standing a second time. However, in that one term of three years she managed to stamp an indelible green mark on her ward, with two further green councillors elected in her wake. She was an iconic figure riding her bike around the ward. She was also remarkable for knowing the exact time to visit every fruiting tree in the Ward, and those of us lucky enough to share in the fruits of her knowledge enjoyed her home-made jam. She was particularly proud of the community apple press she pioneered.

As an enthusiastic art historian, she was a member of various architectural and historical preservation societies, and this interest led her into serving on the local planning committee on the Council and in supporting the preservation of school murals at risk of being destroyed.

When she was not busy around the ward, or in meetings she would bus to Ely each weekend to sing with the choir at St Peter's Church. This was in keeping with the family tradition of choral singing and church music which was so important to Margaret.

Apart from anything else, she had an indefatigable enjoyment of life and people, and a child's enthusiasm for all the things that she saw around her, coupled with a steely determination to rectify problems or injustice.
-----