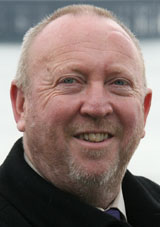 Keith Taylor is the Green MEP for the South East of England. Keith was a Green Party councillor for St Peter’s & North Laine ward in Brighton and Hove for 11 years, having been elected in 1999. He served as leader of the Council’s Green group from 2001, and on the council planning committee for two years. In the 2005 general election, Keith stood in Brighton Pavilion where he got 22% share of the vote - a then-record for the party.

In his role as a MEP, Keith sits on the Committee on Transport and Tourism, and the Committee on Environment, Public Health and Food Safety. He is a member of the European Parliament’s delegation to the Palestinian Legislative Council which works to forge greater links between MEPs and parliamentarians in Palestine.

In his role as a councillor, Keith worked on a huge range of campaigns and case work. He was instrumental in the successful campaign to secure the release of Brighton resident Omar Degayes from the Guantanamo Bay detention facility. He was a representative for Brighton and Hove on the UN Peace Messenger City project and the city's representative to the Local Government Association. Keith also helped to secure a High Court victory for families with severely autistic children – overturning a council decision in the process.

Keith was a Principal Speaker for the Green Party of England & Wales between 2004 and 2006, before the party adopted a single leader structure. He has been a Green spokesperson on planning and regeneration, led the development of the party’s manifesto, and has a history of outstanding performance in local and European Parliament election.

As the Green Party’s next candidate on its 2009 European List for the South-East region, Keith has taken Caroline Lucas’s place in the European Parliament, following her election to the House of Commons as the UK’s first Green MP. Keith was successfully re-elected in May 2014 to serve another five years as Green MEP for South East England.