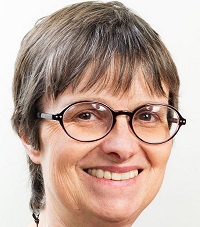 Molly Scott Cato is MEP for the South West of England and was previously a Professor of Economics at Roehampton University. She speaks for the Green Party of England and Wales on finance issues. Molly also has expertise in the issues of renewable energy; trade; food and farming; and co-operatives and mutuals.

Molly grew up in Bath, which she left to study Politics, Philosophy and Economics at Oxford University. Following a career in publishing she took a PhD in Economics from the University of Wales, Aberystwyth focusing on employment in the South Wales Valleys. She has written several books including Green Economics (2009), Environment and Economy (2011) and The Bioregional Economy (2012) as well as numerous academic papers.

Molly has three children and lives in Stroud. She has spent a lifetime involved with social movements and community activity including the Transition Towns and Stroud Community Agriculture in her home town. She enjoys singing, basket-making and bodging.